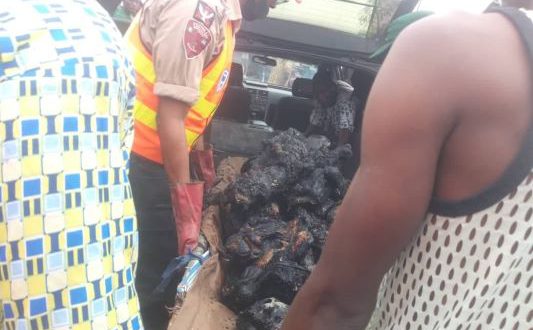 5 Burnt To Death As Tanker Explodes On Lagos – Ibadan Expressway

The victims were reportedly “burnt beyond recognition” during the incident which happened around Tunji Alegi Filling Station, Kwakyama Area of Ogere, Ogun State

A petrol-laden tanker had crashed into another truck, spilled its content, and went up in flames, burning at least five people.

At least, five vehicles were equally burnt during the explosion.

Okpe, who is the Public Education Officer of FRSC, explained that the tanker had collided with another truck which led to a fire outbreak.

She blamed the incident on “wrongful overtaking and dangerous driving” on the part of the tanker’s driver.

Okpe said corpses of the victims were recovered from the crashed trucks and deposited at a morgue in Ipara, Remo North Local Government Area.

“A total of five persons were burnt beyond recognition.

“They were recovered from one of the crashed trucks and have been deposited at FOS Morgue Ipara. Further updates soon,” She said.

Okpe hinted that traffic along the route had been diverted to avoid a secondary crash, just as she advised commuters to remain calm and cooperate with traffic managers.

Our correspondent reports that, on Sunday night, seven people were burnt to death on the Lagos – Ibadan expressway.

According to to the FRSC, “a total of 10 persons were involved in the crash”.