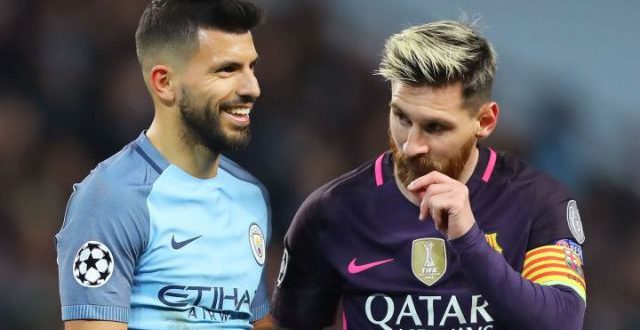 Barcelona have completed the signing of Sergio Aguero, and are planning to present him to supporters on Monday evening.

Fans spotted that Barca’s official website has included a link to the Argentinean forward’s presentation, which is due to take place at 6.15 pm tonight Central European Time.

Aguero had been spotted in Barcelona over the weekend and was due to complete his medical on Monday.

And it appears there have been no problems, with the 32-year-old signing a two-year contract until the end of the 2022-23 season.

He also has a release clause of €100m included in his contract.

The move comes just two days after Aguero was left in floods of tears as City lost the Champions League final to Chelsea.

He came off the bench as a 77th-minute substitute but was unable to influence the game as his wonderful City career came to a bitterly disappointing conclusion.

His manager Pep Guardiola broke down crying in an interview on the final day of the Premier League season as he discussed Aguero’s imminent departure.

The Catalan said: “He’s a special person for all of us.

“He’s so nice. He helped me a lot, he’s so good. We cannot replace him, we cannot.

“There have been many players at this club, like Joe Hart and David Silva, who have helped us to be this club — what it is.

“We helped his legacy and he showed his quality in 20 minutes.”

Aguero will return to La Liga ten years after he made his final appearance for Atletico Madrid, who he starred for between 2006-11.