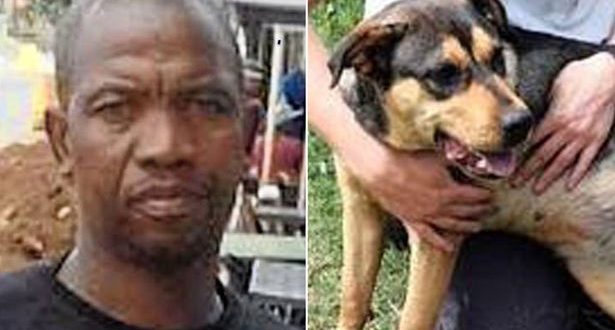 Fanroi Mochachi, 45, was caught having sex with his neighbour’s puppy, eight-month-old Blackie, after her 10-year-old owner and his uncle the animal howling in a communal garden in S. Africa.
Mochachi claimed he had caught two dogs mating on his way to a shared toilet. He was overcome by temptation, chased the male mutt away and had sex with the female one.

A magistrate branded the dad’s disgusting session as “serious, unnatural and barbaric”. “Worse still is that you are married and a role model to your six children,” Syta Prinsloo told him.

“Upsetting is that you will be expected to engage sexually with your wife, how will you explain this to her?” The magistrate said vile Mochachi’s actions and those of others like him – who had uncontrollable desires to sleep with any female, child or animal – were shameful and must be stopped.

But she gave him a suspended five year jail sentence after he pleaded guilty to bestiality in Johannesburg. Jaco Pieterse, a senior inspector at the Sandton Society for the Prevention of Cruelty to Animals (SPCA), said they were extremely concerned about the sentence as Mochachi was now roaming the streets unchecked.

He said: “We’d would like to see much harsher sentences regarding the sexual violation of animals who, like children, are completely helpless to stop such violent attacks on them.”

The family of Blackie’s traumatised owner and other residents were due to swear affidavits in a bid to get a protection order preventing Mochachi from returning to the property where the crime occurred, he added. The SPCA are looking for a new home for the crossbreed. 📸: Iol.co.za