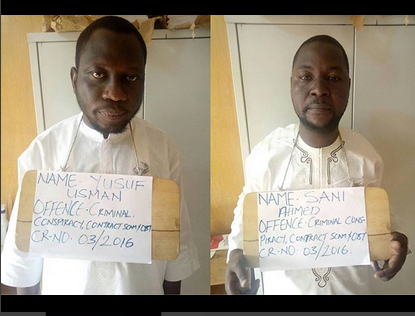 EFCC Gombe Zonal office, has arraigned the duo of Yusuf Usman and Sani Ahmed before Justice M.J Umar of the Federal High Court Gombe on 10 count charge bordering on conspiracy, forgery, contract scam and obtaining money by false pretense.
Their arrest followed a petition by one Abdullahi Nabunkari, Managing Director, Jamali Trading & Construction Company Nigeria Limited, Sokoto State alleging that the accused persons conspired among themselves and invited him to Gombe State with intent to defraud him by using the office of the Deputy Governor, that there was a contract to be given to him.

In other to perfect the scam, the duo took the complainant to Bajoga Motel for inspection of the entire building.

The complainant was requested to sign the contract agreement which made him believe that the contract was genuine, and paid the sum of $44,700.00 as commitment and processing fee before the execution of the contract.

It was later discovered that the documents were forged. While adjourning the case to January 30, 2018, for trial, Justice Umar ordered that the accused persons be remanded in prison custody.