DUBAI, United Arab Emirates (AP) — Four Arab nations cut diplomatic ties to Qatar on Monday over its relations with Iran and support of Islamist groups, isolating the tiny energy rich country by cutting off its land, sea and air routes to the outside world.

Qatar, which will host the 2022 FIFA World Cup and is home to some 10,000 American troops at a major U.S. military base, criticized the move as a “violation of its sovereignty.” It long has denied supporting militant groups and described the crisis as being fueled by “absolute fabrications” stemming from the recent hack of its state-run news agency.

However, the crisis immediately wreaked havoc with its long-haul carrier Qatar Airways, sent the Qatari stock market tumbling and raised questions about how a country reliant on food imports would be affected.

The countries all ordered their citizens out of Qatar and gave Qataris abroad 14 days to return home to their peninsular nation. The countries also said they would eject Qatar’s diplomats from their territories.

Qatar’s Foreign Affairs Ministry said there was “no legitimate justification” for the countries’ decision, though it vowed its citizens wouldn’t be affected by it.

“The Qatari Government will take all necessary measures to ensure this and to thwart attempts to influence and harm the Qatari society and economy,” it said.

All the nations also said they planned to cut air and sea traffic. Saudi Arabia said it also would shut its land border with Qatar, effectively cutting off the country from the rest of the Arabian Peninsula. Already, Doha-based satellite news network Al-Jazeera reported trucks carrying food had begun to line up on the Saudi side of the border, apparently stranded. The Qatar Stock Exchange fell more than 7 percent.

Qatar Airways, one of the region’s major long-haul carriers that routinely flies through Saudi airspace, did not immediately respond to a request for comment. Some of its flights were going through Iranian airspace Monday.

Premier UAE airlines Etihad and Emirates announced they would suspend flights to Qatar, as did budget carriers Air Arabia and FlyDubai. Bahrain’s Gulf Air and Saudia joined them.

Saudi Arabia also said Qatari troops would be pulled from the ongoing war in Yemen. Yemen’s internationally backed government, which no longer holds its capital and large portions of the country, also cut relations with Qatar, as did the Maldives. FIFA, international soccer’s governing body, said it remained in regular contact with Qatar, declining to elaborate.

Qatar is home to the sprawling al-Udeid Air Base, which is home to the forward headquarters of the U.S. military’s Central Command. It wasn’t clear if the decision would affect American military operations. Central Command officials and the Pentagon did not immediately respond to a request for comment.

Saudi Arabia said it took the decision to cut diplomatic ties due to Qatar’s “embrace of various terrorist and sectarian groups aimed at destabilizing the region” including the Muslim Brotherhood, al-Qaida, the Islamic State group and groups supported by Iran in the kingdom’s restive Eastern Province. Egypt’s Foreign Ministry accused Qatar of taking an “antagonist approach” toward Egypt and said “all attempts to stop it from supporting terrorist groups failed.”

The tiny island nation of Bahrain blamed Qatar’s “media incitement, support for armed terrorist activities and funding linked to Iranian groups to carry out sabotage and spreading chaos in Bahrain” for its decision. The U.S. Navy’s 5th Fleet, based in Bahrain, did not respond to a request for comment about whether the decision would affect its operations.

In Sydney, U.S. Secretary of State Rex Tillerson said he didn’t believe the diplomatic crisis would affect the war against the Islamic State group in Iraq and Syria.

“I think what we’re witnessing is a growing list of disbelief in the countries for some time, and they’ve bubbled up to take action in order to have those differences addressed,” Tillerson said. “We certainly would encourage the parties to sit down together and address these differences.”

Before Monday, Qatar had appeared unperturbed by the growing tensions. On May 27, Qatar’s ruling emir, Tamim bin Hamad Al Thani, called Iranian President Hasan Rouhani to congratulate him on his re-election.

The call was a clear, public rebuttal of Saudi Arabia’s efforts to force Qatar to fall in line against the Shiite-ruled nation, which the Sunni kingdom sees as its No. 1 enemy and a threat to regional stability. Qatar shares a massive offshore gas field with the Islamic Republic.

The crisis began in late May when Qatar alleged that hackers took over the site of its state-run news agency and published what it called fake comments from its ruling emir about Iran and Israel. Its Gulf Arab neighbors responded with anger, blocking Qatari-based media, including Al-Jazeera.

Qatar long has faced criticism from its Arab neighbors over its support of Islamists. The chief worry among them is the Muslim Brotherhood, a Sunni Islamist political group outlawed by both Saudi Arabia and the UAE as it challenges the nations’ hereditary rule.

Gulf countries led by Saudi Arabia fell out with Qatar over its backing of then-Egyptian President Mohammed Morsi, a Brotherhood member. In March 2014, Saudi Arabia, the United Arab Emirates and Bahrain recalled their ambassadors from Qatar over the rift. Eight months later, they returned their ambassadors as Qatar forced some Brotherhood members to leave the country and quieted others. However, the 2014 crisis did not see a land, sea and air blockade.

In the time since, Qatar repeatedly and strongly denied it funds extremist groups. However, it remains a key financial patron of the Hamas-controlled Gaza Strip and has been the home of exiled Hamas official Khaled Mashaal since 2012. Western officials also have accused Qatar of allowing or even encouraging funding of Sunni extremists like al-Qaida’s branch in Syria, once known as the Nusra Front.

The crisis comes after U.S. President Donald Trump’s recent visit to Saudi Arabia for a summit with Arab leaders. Since the meeting, unrest in the region has grown.

At that Saudi conference, Trump met with Qatar’s ruling emir.

“We are friends, we’ve been friends now for a long time, haven’t we?” Trump asked at the meeting. “Our relationship is extremely good.” 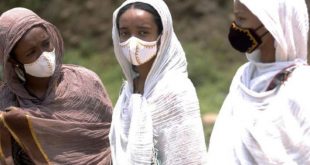