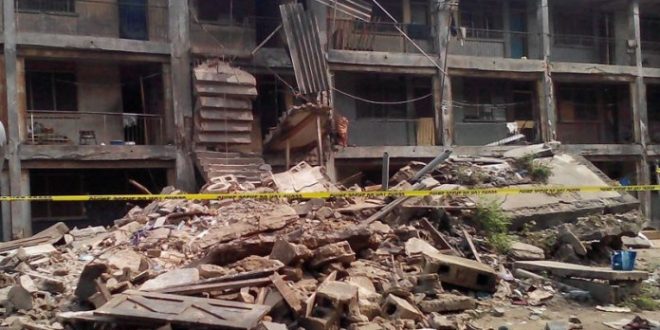 Two people were feared dead while 14 others were rescued alive by emergency respondents on Monday from a collapsed building that happened on Lagos Island.

It was gathered from a reliable source at the scene of the incident that it happened around 7.30a.m., at Daddy Alaja Street, Oke Arin on Lagos Island.

The source said that the two dead persons, a man and a woman, whose identities could not be confirmed by the respondents, were pulled out of the debris from the three-storey building.

The source said that the building, housing many occupants, was also under renovation when it crashed.

The source said, “As at 1.30p.m., all the rescue operations had been concluded. Some of those rescued alive were treated at the scene.

“Those with serious ones were taken to the General Hospital on Lagos Island,” the source told NAN.

The source said that the rescued team include: men and officials from LASEMA, NEMA, Fire Service and the Police Force.

Famous-Cole, however, could not ascertain the number of deaths as at press time.

NAN reports that three buildings had collapsed in Ilasamaja, Ebute-Metta and on Lagos Island in the last three months, in which five persons lost their lives while more than 40 persons were rescued.