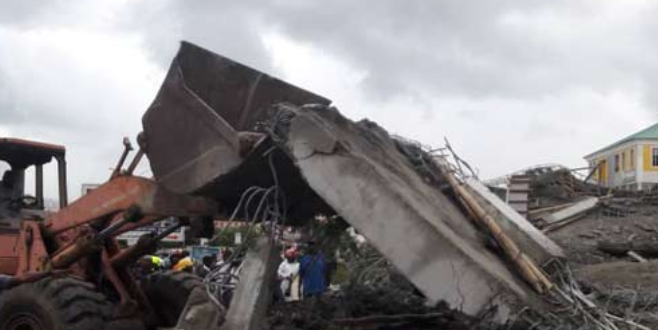 A 3-storey building has collapsed in the Ebutte Meta axis of Lagos Mainland Local Government Area of Lagos State.

The building located on Ibadan Street reportedly caved in around 9:30 pm on Sunday.

According to Daily Trust, Men of the Lagos State Fire and Rescue Service and Lagos State Emergency Management Agency are already at the scene trying to rescue trapped occupants of the building.

A source said nine residents have been rescued from the building.

In a video of the incident shared on social media, a large crowd was seen in front of the building.

The state fire service in an update said, “An alert of a collapsed of a three storey building by 32 Ibadan Street, Ebute Meta was received at 21:48 hours, Sunday with Lagos State Fire and Rescue Service already at the scene.

“Search and rescue ongoing with updates to follow, please.”

Charles Igbinidu is a Public Relations practitioner in Lagos, Nigeria
@https://twitter.com/ionigeria
Previous Meghan Markle’s animated series axed by Netflix as part of cutbacks by the streaming giant
Next Russia confirms launch of TOP-SECRET military spacecraft that will orbit Earth