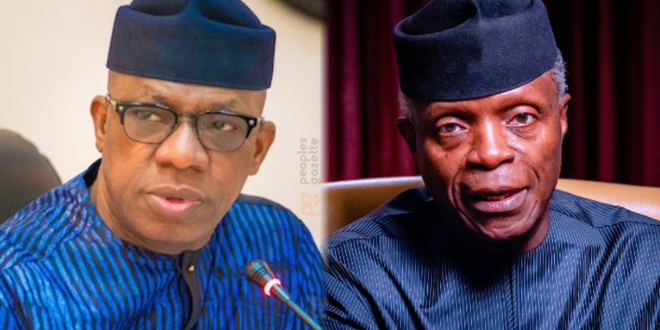 Governor Abiodun had reportedly been in a dilemma over who to support between Osinbajo and former Governor of Lagos State, Bola Ahmed Tinubu.

both Osinbajo and Tinubu were instrumental to Abiodun’s victory when he battled former Governor Ibikunle Amosun’s anointed candidate, Abdulkabir Akinlade, in the last election.

Insiders said the duo expect loyalty and support from the governor who is now in dilemma.

Also, his cabinet members are divided as some are backing Osinbajo’s bid while others are in firm support of Tinubu.

A source close to the cabinet, however, said Abiodun had not given directive to his aides on who to support between Tinubu and Osinbajo.

But Abiodun on Tuesday said Ogun would back Osinbajo, an indigene of the state from Ikenne in Ikenne Local Government Area of the state.

He said the support would enable him continue with some of the “laudable projects” of the President Muhammadu Buhari-led administration.

Speaking at a stakeholders meeting with the vice president held at the Akarigbo Palace Sagamu, the Alake Palace in Abeokuta and the Presidential Lodge, Ibara, Abeokuta, as well as the Palace of Olu of Ilaro and Paramount ruler of Yewaland, Abiodun said Osinbajo in the last seven years, had contributed to the many successes recorded by the federal government, noting “he is eminently qualified to lead the country”.

“The Vice President present here is home coming. We are pleased with his decision to run for the office of the president. He is competent and committed to lead the country in a higher capacity.

“Your steadfastness, integrity and character are all well known. You are serving this country and the president meritoriously for the last seven years as the vice president. We have no doubt that you will do well as the president and we will support you,” Abiodun stated.

The governor, who extolled the Osinbajo’s academic exploit, recalled how he stood behind his gubernatorial election and described him as a man who is interested in fairness, justice, equity and the Rule of Law.

In his speech, Osinbajo said he was not in the state to campaign, but to inform his people of his intention to run for the office of the president.

Osinbajo said he consulted widely across all sections of the society, including with President Muhammadu Buhari, before he threw his hat into the ring.

Recounting his contributions to the present federal government, Osinbajo said he was actively involved in the judiciary reforms and its repositioning to work optimally and ensure that judges are adequately enumerated.

He said his working with President Buhari exposed him to governance at the highest level and placed him in a position to tackle serious issues concerning economy, security, among others.

“The Vice President position is an opportunity to serve and I have served with utmost loyalty. I put everything into my work. I am a candidate who will hit the ground running when I am elected.

“I have the requisite knowledge to do the job and building on what others have put in place. My presidency will bring peace, unity and development to the country”, the VP said.

“After all, I have learnt if called upon to serve the nation, should I say No? I have decided that I will run for the office. I have sworn an oath to the Federal Republic of Nigeria. It is an oath to our people, our children and the future of Nigeria. I owe nobody else any allegiance outside the oath”, he added.

Osinbajo, however, commended the Abiodun-led administration for the giant strides it has recorded in the last three years, expressing the hope that his quest to lead the country would be fruitful.

The and Paramount Ruler of Remoland, Oba Babatunde Ajayi, in his remarks, posited that the vice president was competent with the required qualification to lead the nation, observing that his performance as the acting president is there for all to see.

Speaking on the ambition of the Vice President, the Alake of Egbaland, Oba Adedotun Gbadebo, attested to the competence of Osinbajo, saying, “the vice president has paid his dues and is eminently qualified to succeed as President.”

“I want to pray that you will come back to this Palace as a President and Nigeria will be gain tremendously under your watch,” Alake added.