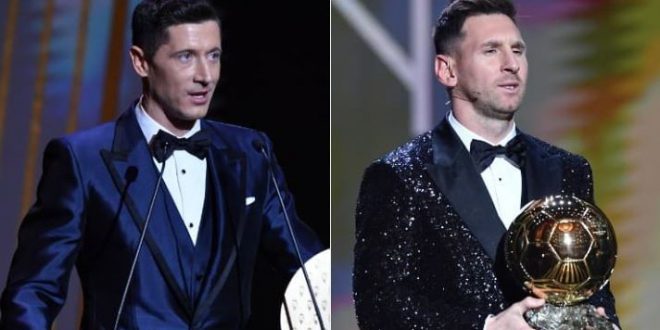 Bayern Munich striker Robert Lewandowski revealed his true feelings after the 2021 Ballon d’Or ceremony, in which Lionel Messi won his seventh award, and he has even slammed the PSG superstar.

The 2021 Ballon d’Or has seen Lionel Messi win the coveted award for a world-record seventh time. But the results haven’t pleased a number of people in world soccer, from fans to former players such as Iker Casillas.

Despite many leaks in the previous weeks suggested the Argentine superstar would receive the prize, a lot of fans still expected France Football to give the award to Bayern Munich striker Robert Lewandowski.

The Poland international came from a superb performance in 2020 and many believed it was unfair he didn’t get the award last year, even Messi said it in last week’s ceremony. However, that didn’t seem to be enough for Lewandowski.

In an interview with Pole TV show Moc Futbolu of Kanale Sportowym, the 33-year-old has broken the silence after the 2021 Ballon d’Or ceremony and he has expressed how unhappy he feels with the results.

“I felt sad, I have nothing to hide,” Lewandowski said. “I can’t say I’m satisfied because it’s quite the opposite. I feel unsatisfied… Being so close, competing with Lionel Messi… Of course, I respect how he plays and everything he has achieved. The fact that I could compete with him shows me the level I’ve been able to play at. But I felt sad and it was good that we didn’t have a midweek game after the gala,“ he continued.

Many people agreed that Lewandowski would have been the winner should the ceremony took place last year. Even Lionel Messi praised him and said he should have won it in 2020. “You were the winner last year and France Football should give you the award. You deserve it, you should have it at home too,” Messi said after receiving his seventh trophy.

However, the Pole forward didn’t feel impressed by what the PSG star said. “I would like his statement to be honest, not just empty words,” he said. Lewandowski is clearly upset, as he has even stated he’s not thrilled to win the prize in the future.