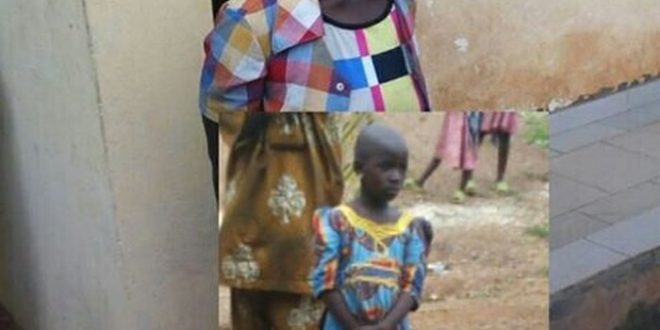 The Ogun State police command has arrested a 20-year-old woman, Ajoke Owolabi, for allegedly kidnapping a seven-year-old girl, Racheal Olorunshola, and keeping her in custody for 19 months.
The little girl, according to a statement by the command’s spokesman, Mr. Abimbola Oyeyemi, said the suspect kidnapped the girl while returning from school and the parents have been looking for her since then.

Oyeyemi disclosed that the girl was “suddenly brought home to her parents by a Good Samaritan last month. Few weeks later after her return, the girl, while playing in front of her parents’ house in Igbore area of Abeokuta saw her abductor passing by and immediately raised an alarm,” Oyeyemi disclosed.

“The victim identified Owolabi as her abductor and she was promptly arrested by the police but she denied ever knowing the girl. The girl quickly mentioned her name as Aunty Ajoke and when she was searched, her name was seen conspicuously written on her body. It was then she admitting the crime.”

The suspect also admitted that she took the victim to Oshodi in Lagos where she was kept for 19 months. Owolabi admitted that she came to attend a party in Abeokuta and kept the girl in a room in Lagos from where she escaped, adding that she passed through the girl’s parents’ house unknown to her that the girl was there on that fateful day when she was arrested.