Arsenal have agreed a £55million deal to sign Pierre-Emerick Aubameyang from Borussia Dortmund, but the club record transfer is being held up as the German side look for a replacement.

Dortmund were offered Olivier Giroud as part of the deal last week but did not want the France veteran. Now they are looking at Anthony Modeste, the 29-year-old currently at Tianjin Quanjian in China, Chelsea’s Michy Batshuayi, Argentinean youngster Lautaro Martinez of Racing Club, and want to bring in a new striker before they will sanction the deal.

Arsenal have been negotiating with Dortmund for weeks over the signing of Aubameyang but on Sunday they made a breakthrough. Dortmund had initially wanted £61m (€70m) for Aubameyang and Arsenal’s opening offers were of £40m and £44m for the Gabon international.

But this weekend they raised their offer to £55m plus add-ons and Dortmund agreed to a sale. Aubameyang’s personal terms with Arsenal have now been agreed too and he is ready to join the London club. 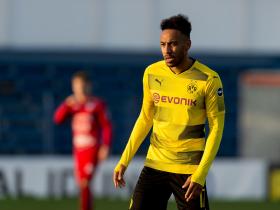 Aubameyang and Dortmund have been at odds all season, he has twice been dropped for disciplinary reasons and Dortmund believe that he had his head turned by a lucrative offer from China.

Now Dortmund are ready to sanction selling the striker as soon as they have a replacement.

New manager Peter Stoger has targeted the signing of Modeste, the

France striker who starred for him during two seasons at FC Koln before joining Chinese side Tianjin Quanjian. He is a short-term option for Dortmund and they are also interested in a loan deal for Chelsea’s Michy Batshuayi.

Dortmund are also looking at 20-year-old Martinez as their next long-term centre-forward. Martinez has been compared to Sergio Aguero and attracted the attention of Europe’s top clubs. They have also been interested in Duvan Zapata, the 26-year-old Colombian currently on loan at Sampdoria.

Previous My Wife Curses Me With Her Private Part, Pastor Cries Out
Next Revealed: Former Libyan dictator Colonel Gaddafi was just “hours” away from purchasing Manchester United