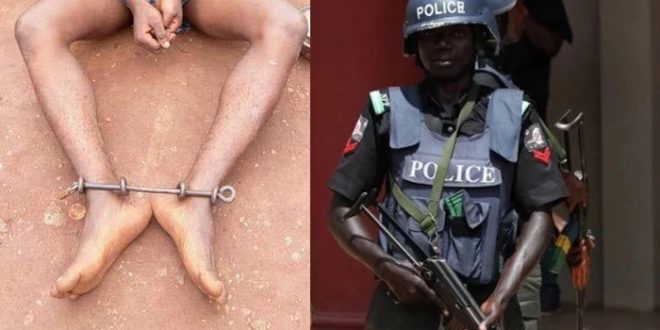 A 15-year-old pupil at the Community Secondary School, Akenfa-Epie, in the Yenagoa Local Government Area of Bayelsa State, identified only as Emmanuel, has been arrested with a gun.

Emmanuel was allegedly arrested on Monday with a locally-made pistol during lecture hours. It was learnt that the teenager was apprehended while in school uniform by some indigenes of Akenfa community, led by a vigilance group, and handed over to the police.

The pupil was reportedly searched by the vigilante youths after he was accused of involvement in some criminal activities, including robbery.

The school authorities, however, denied that the suspect was a pupil at the school.

A member of the school management team, who spoke on condition of anonymity, added that Emmanuel was not arrested in the school.

He said, “The boy was not arrested in the classroom. The uniform he wore is common among pupils in the state and so, it is not correct to say that he is a pupil at the school.”

The arrested teenager was handed over to the Akenfa Police Station for onward transfer to the command headquaters.

The spokesman for the Bayelsa State Police Command, Asinim Butswat, confirmed the arrest of the teenager.

He said, “The suspected cult member was arrested with a locally-made pistol on Monday around 9.30am.

“The suspect is 15 years old and a resident of Agudama area of Yenagoa. Investigation is ongoing.”

It will be recalled that four teenage gunmen, suspected to be members of an unknown cult, recently attacked a secondary school in the state capital.

The gunmen, who brandished guns, caused pandemonium in the school as confused pupils and staff ran in different directions for safety.

The invasion of the school came a few hours after the Bayelsa State Government, through the Ministry of Education, expelled seven pupils over their alleged membership of a cult.

The government had admitted to the existence of cult activities in both primary and secondary schools in the state, saying it was making efforts to address the problem.