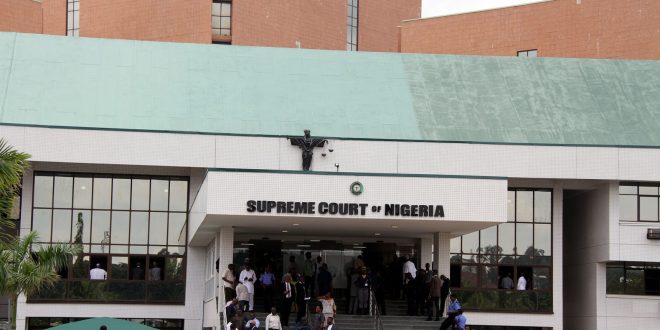 Fourteen Justices of the Supreme Court have written to the Chief Justice of Nigeria (CJN), Tanko Muhammad, lamenting the parlous state of affairs in the court.

In a first-of-its-kind protest letter in the 58-year history of the apex court, the justices chronicled the operational challenges that have almost crippled the efficient adjudication of cases at the court.

According to PREMIUM TIMES, the protest became necessary following the refusal of the CJN to address the issues despite drawing his attention to them.

The aggrieved justices led by the second most senior judge of the Supreme Court, Olukayode Ariwoola, listed the issues to include — vehicles, electricity tariff, supply of diesel, Internet services to (Justices’) residences and chambers, and epileptic electricity supply to the court.

Following the complaints that were raised at a March 2022 meeting “after several persistent requests to hold the meeting,” a “welfare committee” was set up to aggregate the issues.

But the justices said, “Your Lordship (the CJN) received and ignored these demands since 24th March 2022.”

According to the letter, some justices who were sworn in two years ago, lack residential accommodation at the court.

“At the Justices meeting, we intimated your Lordship that some Justices sworn on the 6th day of November 2020 were yet to be accommodated by the Court.

“Your Lordship promised to take up the issue that day. To date, Your Lordship has not taken any step in this direction.”

Another issue the justices raised concerns decrepit vehicles with several due for replacement, while “some of the vehicles supplied to the justices are either refurbished or substandard,” as Mr Muhammad refused “to address this problem.”

On the issue of overseas training, the CJN was accused of gallivanting with his “spouse, children and personal staff,” while depriving the rest of the judges of the Supreme Court of such. On two occasions when the judges travelled overseas for the training, they said, they were not allowed to go with an assistant as it used to be under previous administrations.

“We DEMAND to know what has become of our training funds, have they been diverted, or is it a plain denial?” the justices queried.

“Your Lordship’s assumption of office Justices only attended two workshops in Dubai and Zanzibar. They were not accorded the privilege of travelling with accompanying persons as was the practice,” the letter said.

The justices decried the lack of legal research assistants, despite the magnitude of cases being adjudicated.

“We are confronted with various complex legal issues of national significance with the addition of time-bound matters coming in between our regular Court sittings. We require qualified legal assistants in order to offer our best. This demand has not been accorded any attention by the Honourable Chief Justice.”

They pointed out that “healthcare has deteriorated” with the Supreme Court’s staff clinic becoming a “mere consulting clinic,” where “drugs are not available to treat minor ailments. There is a general lack of concern for Justices who require immediate or emergency medical intervention.”

On the issue of rules of court, the justices said the CJN has withheld his assent to “Rules of Court for almost three years now,” thereby slowing justices’ productivity in dispensing with cases, adding “we strongly believe the new rules will aid speedy dispensation of justice.”

On erratic electricity supply, the justices said they have been confined to work between the “hours of 8 a.m and 4 p.m daily, for lack of diesel,” after they were notified of the development by the Supreme Court’s Chief Registrar, Hajo Bello.

Lamenting the implications of Ms Bello’s memo of shutting down power supply by 4. p.m, even when justices have judgements and rulings to write outside of office hours, they said: “The implication of this memo (on power shutdown) is that the Justices must finish their work and close before 4 pm. Your Lordship with all due respect, this is the peak of the degeneration of the Court; it is the height of decadence and clear evidence of the absence of probity and moral rectitude.”