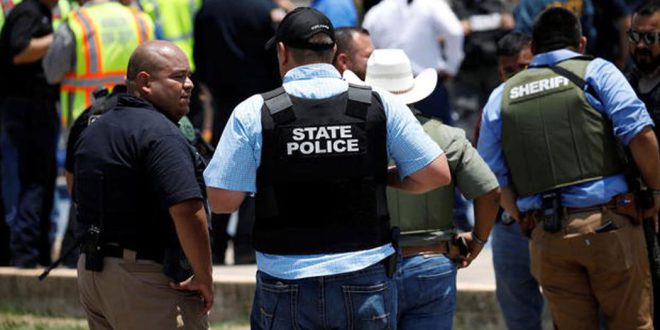 FOURTEEN students and one teacher are dead after a gun-wielding suspect entered an elementary school and opened fire, according to Texas Governor Greg Abbott.

The suspect has been identified as Salvador Ramos, 18, a Uvalde, Texas, resident who Governor Abbott said abandoned his vehicle and entered Robb Elementary at around noon on Tuesday.

Governor Abbott said Ramos entered the school with a handgun, “shot and killed horrifically and incomprehensibly 14 students and killed a teacher.”

Two additional students who arrived at UMH were deceased on arrival, the hospital said.

Uvalde Mayor Don McLaughlin did not confirm casualties but told ABC News in a text message that “this is a very bad situation.”

He said the office is trying to contact parents before releasing any information.

UMH said another 66-year-old woman is in critical condition. Neither the school district nor the police department has confirmed if she was a teacher.

Police first said a heavy law enforcement presence responded to the scene but failed to elaborate.

Uvalde Mayor Don McLaughlin initially told Fox News that the shooting took place off-campus, but the shooter ran into the school and barricaded himself inside.

“Your cooperation is needed at this time by not visiting the campus.”

Uvalde is about 83 miles west of San Antonio.

More to follow…For the latest news on this story keep checking back at Sun Online.