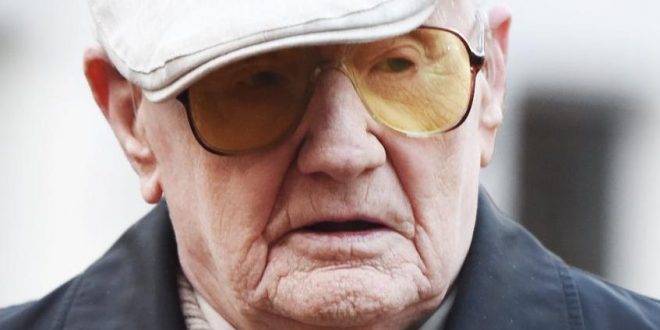 A 101-year-old paedophile who sexually abused children as young as four in his garden shed has become the oldest criminal to be jailed in British legal history.

Ralph Clarke is almost certain to die behind bars after a judge handed him a 13-year term for the child sex attacks spanning nearly a decade.

The former lorry driver committed a catalogue of assaults against a boy and two young girls between 1974 and 1983. The attacks took place in the pensioner’s “man cave” workshop and in the cab of his truck.

His three victims wept as the verdicts were delivered and hugged each other in court after they were completed.

Clarke, of Erdington, Birmingham, admitted nine sex offences against a boy, who he abused between the ages of nine and 14, halfway through his two-week trial.

He was cleared of one charge of indecency with a child.

Judge Richard Bond said he would sentence Clarke on Monday morning after he had heard victim impact statements and submissions on the guidelines.

Clarke, who walks with the aid of a white stick, was given special permission to sit outside the dock at the back of the court during the trial.

The retired lorry driver listened to proceedings through his hearing aid and had an intermediary sitting next to him for support.

Judge Bond told the jury he was “speaking slowly” for the benefit of the OAP and had reduced sitting hours of between 9.30am and 1.30pm to allow Clarke to go home.

The court heard Clarke indecently assaulted the three victims in his lorry cab and his “man cave” shed between 1974 and 1983.

Prosecutor Miranda Moore QC told the jury he also abused the children, who are siblings, in the bath and in a bed.

He bribed the young girls with sweets and money and would even take his false teeth out before committing sex acts on the boy.

Clarke was arrested after his two female victims walked into a police station in August last year to make a complaint against the centenarian.

Miss Moore told the jury they were “tipped over the edge” when he turned 100 in March 2015 and “everybody was saying what a good life he had led”.

The court heard Clarke abused one of the girls from the age of seven and would force both female victims to perform sex acts on him.

Miss Moore said: “(The victim) said it was a daily event. The defendant was very handy, he could mend things.

“He had one of those workshops, probably today it would be called a man shed or man cave. All three victims talk about being in a garden shed or a workshop.

“(The victim) remembers sitting on the bench, she remembers that the abuse happening in the shed was in the summer. When he did these things he was a young and strong man and they were children.”

Clarke was found guilty of 12 charges of indecent assault and nine counts of indecency with a child relating the two young girls.

He also denied five charges of indecent assault, two counts of indecency with a child and two charges of attempting to commit buggery.

But he changed his pleas to guilty to all nine counts, which all refer to the male victim.

Miss Moore told the jury: “He (the boy victim) was also abused in the garage workshop. He vividly remembers that the defendant would take his teeth out beforehand.”

Giving evidence, Clarke told the jury the offences against the boy were “something that happened”.

But he claimed there wasn’t enough room in his makeshift workshop for anything to have happened between him and the two girls.

Clarke said: “What room was in there, I needed. I had always got a pile of kids around the garage because I used to repair all the BIKES

for them. They’d come from all over.

“All the children used to know me as Nobby.”