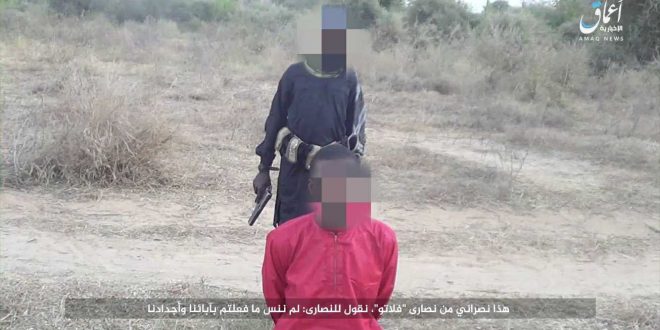 Islamic State West African Province has released a video that shows a Christian man being executed by an Islamic State child “soldier” in Borno, Nigeria.

In a video released by its news platform, Amaq agency, ISWAP said the Christian man was killed on Monday.

Pieter Van Ostaeyen, a member of the editorial board of the International Centre for Counter-Terrorism based in the Hague, said the “kid is about 10.”

In a video, the jihadists showed the face of the man wearing a red kaftan and kneeling right in front of the young terrorist who made some recitations before shooting the man.

“Someone brainwashed that poor kid, deprived it of its innocence and made it believe it was justified to kill other people in the name of a sick ideology,” Tomasz Rolbiecki, a researcher on Islamic State’s attacks worldwide said.

“If anyone ever asks me what is the worst part of the Islamic State, I’ll show them this,” he added.

The killing comes weeks after ISWAP released a video claiming to show the killing of 11 Christians.

The militants said it was part of its recently declared campaign to “avenge” the death of its leader Abu Bakr al-Baghdadi during a US raid in Syria in October.

No details were given about the victims, who were all male, but ISWAP says they were “captured in the past weeks” in Nigeria’s north-eastern Borno State.

One captive in the middle was shot dead while the other 10 are pushed to the ground and beheaded.

“We killed them as revenge for the killing of our leaders, including Abu Bakr al-Baghdadi and [IS spokesman] Abul-Hasan al-Muhajir,” said a member of the group’s media unit, according to Ahmad Salkida, a journalist who was first sent the video.